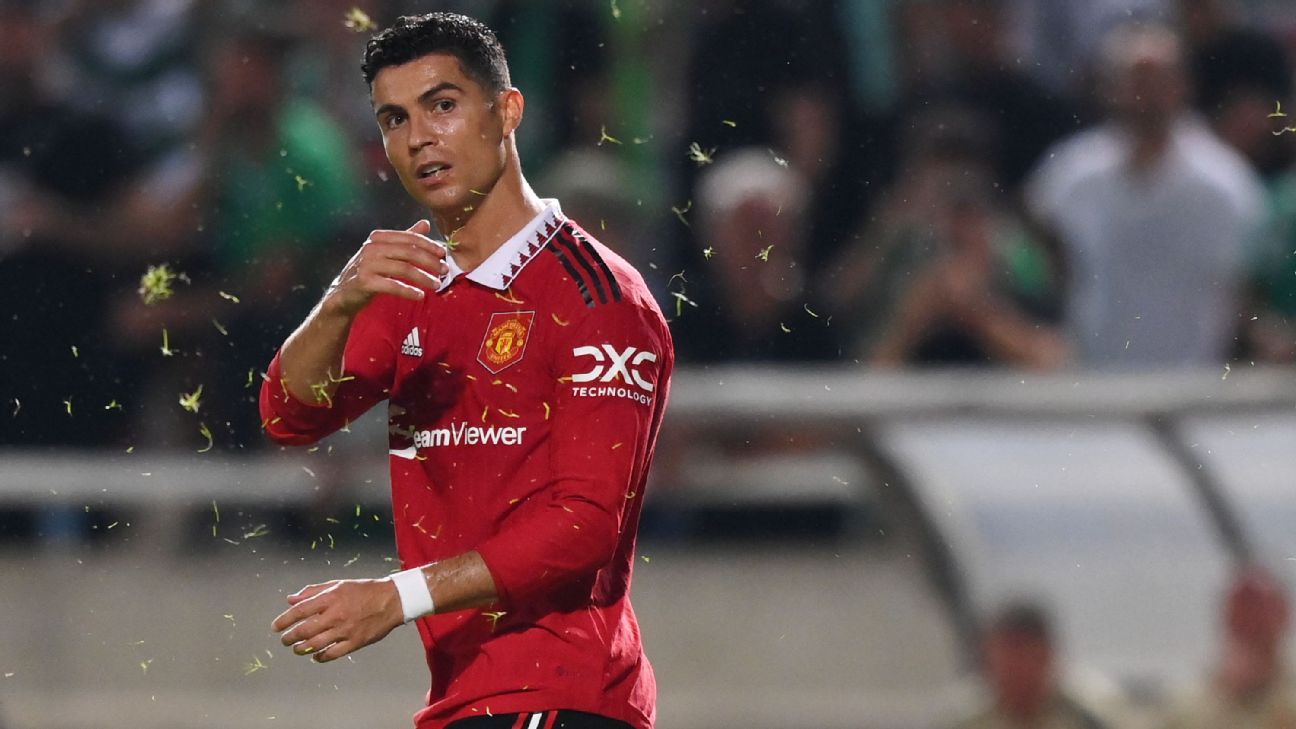 He’s one of the greatest players of all time but nobody appears interested in Cristiano Ronaldo — ESPN’s Insider Notebook has the latest. PLUS: Could Lionel Messi make a sensational return to Barcelona?

Manchester United are confident Cristiano Ronaldo will stay at the club in January mainly because of a lack of interest in him, sources told ESPN.

United are prepared for Ronaldo to mount another push to leave Old Trafford if he cannot win a regular place in Erik ten Hag’s team. United are aware that he could look to move in January in a bid to find regular first-team football.

UEFA rules would allow Ronaldo to sign for a team in the Champions League in January and play in the knockout rounds in the new year despite having made three appearances for United in the Europa League this season.

Despite Ronaldo’s well-known desire to move in the summer, United only received one firm offer from a club in Saudi Arabia, a bid that was dismissed by both Ronaldo’s camp and United. But sources close to the club insist it remains unclear how much of a market there would be for the 37-year-old in January.

– Ten Hag cut Ronaldo from team out of respect

Speculation in the summer linked Ronaldo with Champions League sides including Chelsea, Napoli and Bayern Munich, but United never received a proposal from any club in Europe.

Sources told ESPN there’s an acceptance Chelsea’s stance may have changed after Graham Potter replaced Thomas Tuchel as manager, although they eased their problems up front with a move for Pierre-Emerick Aubameyang late in the window.

Ronaldo has endured a difficult start to the season, scoring one goal — a penalty in the Europa League against Sheriff — and United boss Ten Hag recently revealed how the No. 7 is “pissed off” with his lack of game time.

Sources have told ESPN that Ten Hag is understanding of Ronaldo’s situation but would be reluctant to let him leave in January. The Dutchman has already been told it is highly unlikely there will be money to spend until next summer, reducing the possibility that a replacement could be found for the Portugal forward. — Rob Dawson

Messi back to Barcelona?

Barcelona have held internal talks about the possibility of bringing Lionel Messi back but various sources told ESPN the chances of a deal happening remain remote.

Messi, 35, will not entertain any discussions related to his future until after the World Cup in Qatar this year, with Barca among the clubs waiting to see what he decides to do when his Paris Saint-Germain contract expires in June.

Messi joined PSG in 2021 on an initial two-year deal with an option for an additional season if both parties wanted to extend their relationship. PSG are keen to renew Messi, who has started his second season in France in fine form, scoring eight times in 13 appearances, and some sources said continuing in Paris is the most likely scenario at the moment.

Barca president Joan Laporta told ESPN in the summer that Messi’s “chapter” at the club deserves a better ending than the one it got last year. Xavi Hernandez is also open to the return of his former teammate.

Vice president Eduard Romeu, meanwhile, has said a deal would be possible financially if Messi were to join as a free agent, although sources told ESPN it would not necessarily be an easy deal to do. Barca still owe Messi money from deferred wages during the pandemic.

Messi also has interest from Major League Soccer, where Inter Miami would be his most likely destination. Sources say Argentina‘s recent game against Honduras in Miami served to lay the foundations for a possible move at some point the future. — Sam Marsden and Moises Llorens

Shaka Hislop discusses Lionel Messi returning to Barcelona after Vice President Eduard Romeu said it would be possible next summer.

Chelsea left it too late for Leao

AC Milan technical director Paolo Maldini recently confirmed that Chelsea made a late summer offer for Rafael Leao but ESPN can reveal just how late the Blues left it to make their interest known.

Chelsea made contact with the Serie A side over the Portuguese winger earlier in the summer but waited until the final three days to make a verbal offer — not a formal, written bid — thought to have been below €100 million, significantly lower than Milan’s valuation and his €150m release clause. The move was a non-starter given just how late Chelsea’s interest appeared as there was so little time to identify and sign a replacement.

Milan also have a firm desire to retain the 23-year-old by agreeing a new long-term contract — his existing agreement expires in 2024 — with talks expected to begin soon over an extension.

Whether Chelsea can resurrect a move for Leao in January or next summer remains to be seen. He fits the younger, progressive profile of player co-owners Todd Boehly and Clearlake Capital have identified as central to the club’s future. But they will need to get their act together much earlier before the deadline to land their man. — James Olley

Pep Guardiola masterminded Manchester City‘s derby demolition of Manchester United last Sunday by targeting Lisandro Martinez, sources told ESPN, but his tactical plan had nothing to do with the defender’s height.

City beat Erik ten Hag’s team 6-3 having raced into a 4-0 half-time lead at the Etihad. By the end of the game, both Erling Haaland and Phil Foden had scored hat tricks for the Premier League champions.

– Ogden: Haaland is the best in the world
– Dawson: Why is Casemiro not playing?

Going into the game, Martinez’s lack of height had been highlighted as a potential issue for the Argentina international, who stands 5-foot-9 and was due to mark the 6-foot-4 Haaland. Despite the obvious difference in physique, Martinez successfully nullified Haaland while playing for Ajax in their 4-0 Champions League win against Borussia Dortmund last season.

Guardiola had dismissed Martinez’s lack of height as an issue ahead of the United clash, instead praising the 24-year-old’s defensive qualities and his reading of the game. But sources told ESPN that City’s game-plan centred on Martinez being so preoccupied with marking Haaland that he would leave gaps for Foden to exploit in the left side of United’s back four.

Sources said that Guardiola urged Foden to attack the space in that area of pitch because the City manager was convinced that Martinez and Raphael Varane would double up on Haaland. Guardiola was proven right and both Foden and Kevin De Bruyne took advantage of gaps in the United back four, created by Martinez drifting across to Haaland, to tear Ten Hag’s team apart.

City were 4-0 ahead by half-time and 6-1 up after 73 minutes, only for United to reduce the margin of defeat with two late goals by Anthony Martial.

Sources also told ESPN that, rather than praise his players for building a 4-0 half-time lead against United, Guardiola repeatedly told his team to “remember Leicester” after seeing City almost throw away a 4-0 half-time advantage against the Foxes last season, eventually winning 6-3 after Brendan Rodgers’ players had pulled the score back to 4-3 early in the second-half. — Mark Ogden

After failing to find an agreement with Inter Milan over the transfer of Milan Skriniar, Paris Saint-Germain will try to recruit the Slovakia defender again in January, sources told ESPN.

PSG had bids of around €60m rejected by Inter who wanted €80m. Now, the Ligue 1 champions are preparing a new €30m offer for the winter transfer window.

Skriniar, 27, is out of contract at the end of the season and does not want to extend his deal with Inter. The Nerazzurri, who announced losses of €140m last week, can’t afford to let Skriniar leave on a free transfer so they could be open to accepting PSG’s new offer.

By holding on to their player, Inter were hoping that they could convince him to sign a new deal but they have, so far, failed to do that. — Julien Laurens