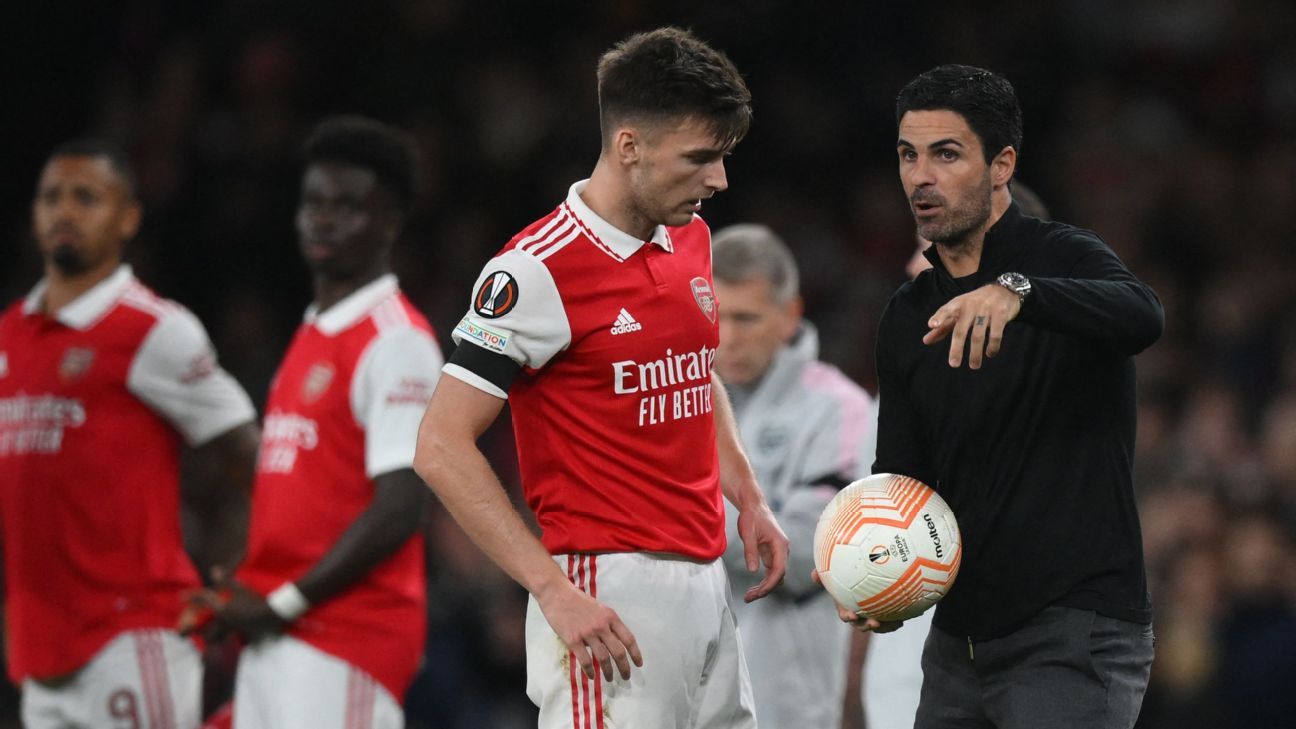 A visitor to Mikel Arteta’s apartment during his time working within Pep Guardiola’s backroom staff at Manchester City described the scene as a “football laboratory.” Arteta’s wife and children were overseas at the time and so the Spaniard was alone in a modest, but modern, abode — except it didn’t look like a home at all.

“The walls were covered in tactical charts and statistical data,” the visitor, a former employee of another Premier League club, told ESPN. “There were several television screens showing different matches simultaneously and papers everywhere. I’ve never seen anything like it.”

Arteta’s meticulousness is the root of Arsenal‘s current resurgence. It was a factor in the Gunners risking appointing a novice in December 2019 and, after witnessing how his studious methodology delivered an improbable FA Cup success inside eight months, it was also why they promoted him from head coach to manager a few weeks later. That was a particularly significant move given the club’s shift away from focusing power on one man following Arsene Wenger’s departure in 2018.

He arrived at Emirates Stadium with question marks over whether he could manage a team effectively. This weekend, he will make the same journey to north London aiming to cement Arsenal’s position at the top of the Premier League instead. Victory for the Gunners would take them 14 points clear of Liverpool, their opponents on Sunday. Jurgen Klopp’s side would still have a game in hand, but such a significant gap at this stage of the season would only enhance the perception that these two sides are on markedly different trajectories at present.

The longevity of Arsenal’s renaissance is unknown, but their resurgence is undeniable. What is certain is that it’s born almost entirely of Arteta’s singular vision. The Gunners’ much-maligned owners, Kroenke Sports Enterprises, deserve credit for committing considerable cash in backing Arteta’s judgement, ranging from paying off unwanted players to pursuing new signings over the past two summer transfer windows at a cost of more than £250 million.

Those who have worked with Arteta speak of an intense character, one who is single-focused and relentlessly driven. Sources have told ESPN that some people at the club felt the 40-year-old had to modify his human touch; Arteta was a highly effective coach at City, but being the manager changes the dynamic with players and there were teething problems, not least with fringe squad members who weren’t always clear on why they were being left out.

That said, the unity and collective sense of identity Arteta has created is remarkable. Sources suggest Arteta was concerned about Arsenal being anchored in the past, rather than taking the best of its history to move forward. Installing a stronger work ethic and professional discipline was the first part; overhauling the playing squad to implement a new high-press, dynamic style was another. Even little touches — like the decision to embrace local lad Louis Dunford’s song “The Angel (North London Forever)” before matches — are all part of that wider missive to make Arteta’s Arsenal feel like something new.

And so, a match against Liverpool provides an opportune moment to test the foundations of this construct.

Arteta has faced Klopp’s side more than any other since taking charge: nine times across all competitions, winning just once in the Premier League. That victory — a behind-closed-doors match in July 2020 when Liverpool had already secured the title — was secured with two shots on target and 31% possession, similar numbers to the FA Cup semifinal and final wins over Manchester City (four, 29%) and Chelsea (three, 40%) respectively earlier that season.

However, Arsenal’s blueprint for the big games — and pretty much any game now, in fact — is now to start on the front foot and take the game to their opponents; last weekend’s 3-1 win over Tottenham Hotspur featured nine shots on target and 65% possession, albeit against a side who played half an hour with 10 men.

The arrivals of Gabriel Jesus and Oleksandr Zinchenko from City — who would surely not have made the move had Arteta not been their manager-in-waiting — have helped give Arsenal greater control of matches, supplementing the work he has done improving existing players. In past interviews with ESPN, both Pablo Mari and Cedric Soares spoke almost in awe of the tactical insight Arteta has offered to improve individual aspects of their games.

Another player to benefit is Granit Xhaka. Sources have told ESPN that Arteta’s attention to detail has been particularly useful for Xhaka, who has often struggled with his defensive positions. During his four years at Borussia Monchengladbach prior to joining Arsenal in 2016, Xhaka worked mostly under Swiss coach Lucien Favre. Sources close to the club at the time describe how during training sessions focused on team shape, Favre would stop play and physically drag players into the correct positions where they should be in relation to the ball.

Xhaka is thought to have benefitted significantly from this at the time but when he joined Arsenal, Wenger’s coaching style was focused more on expressionism in possession rather than discipline without the ball. Xhaka consequently found himself out of position more often, an issue Wenger’s successor, Unai Emery, was unable to rectify largely through his substandard grasp of English. Arteta inherited Xhaka at his lowest, stripped of the captaincy and eyeing a move yet has transformed him into one of the most influential players in his new-look Arsenal, adapting his position to give him greater licence to focus on the attacking edge to his game.

When speaking on Friday morning ahead of the game, Klopp singled out Gabriel Martinelli (not for the first time) and Bukayo Saka for individual praise, while revealing he tried to sign Martin Odegaard as a 15-year-old, only for the Norwegian to select Real Madrid from a plethora of interested clubs. Klopp’s news conference, however, largely involved lingering questions about his team’s form, understandably given they sit ninth in the table after two wins from seven matches.

“We have to defend the s— out of everyone we face,” he said, somewhat crudely but accurately highlighting how important pressing the ball will be this weekend. “We jump with our full-backs to the full-backs of other teams,” he continued, outlining the key battle between Trent Alexander-Arnold and Zinchenko on Liverpool’s right flank. Alexander-Arnold’s ultra-advanced positioning often enables Liverpool to overload opponents in midfield while for Arsenal, Zinchenko mirrors Joao Cancelo at Manchester City, drifting into midfield to allow Xhaka the cover to push on.

Arsenal’s sole defeat this season — losing at Manchester United last month — came when their counter-press let them down. Liverpool, along with Manchester City, have been the masters of this highly aggressive style for some time.

“To press, you have to commit to a common plan,” said Klopp. “That only works if everybody feels the same. That might have been a little bit of the problem [recently]. We were not all in the same place in that moment, all the same confidence levels for doing these kind of things because we all have different solutions for the same problem.”

Klopp will arrive at Emirates Stadium this weekend finding Arteta, his players and the club’s supporters firmly in the same place. It is Arteta’s house these days.