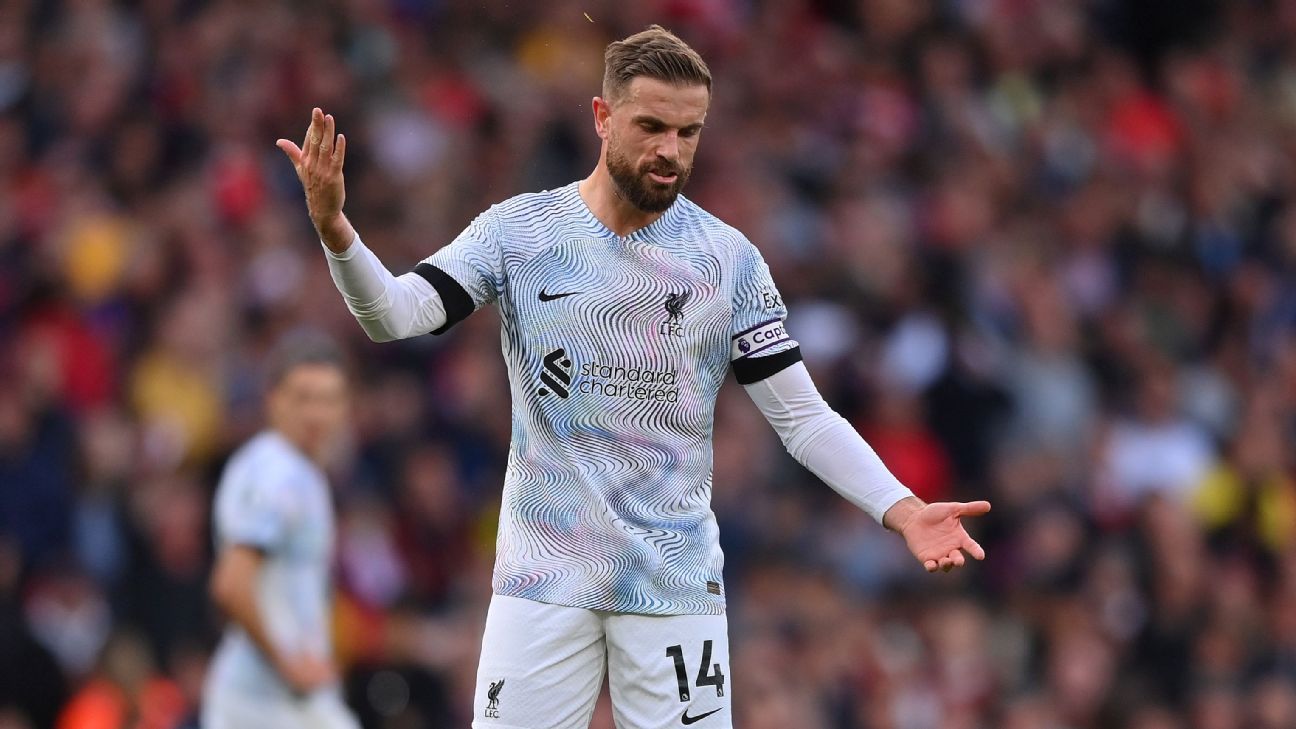 Another weekend of headlines, golazos and unpredictable finishes across Europe’s biggest leagues. From Borussia Dortmund‘s dramatic 2-2 draw with Bayern Munich, to Liverpool dropping even further back in the Premier League title race, there was no shortage of drama.

Cristiano Ronaldo came on for Anthony Martial against Everton to score the 700th goal of his club career. but the substitution could have even greater implications. Ronaldo is finding it hard to get opportunities in the Manchester United team, but another injury to Martial makes it even less likely he will be allowed to leave Old Trafford in January.

Erik ten Hag is wary of leaving himself short of options during the most hectic season he has ever had to navigate, and he can’t rely on Martial to be available regularly. The Frenchman has already missed games this season because of hamstring and Achilles injuries, and Ten Hag can’t leave himself in a situation where Marcus Rashford is the only fit striker in his squad.

If Martial can’t stay injury-free, Ronaldo’s move away will have to wait until at least the end of the season — Dawson

Are Liverpool out of the title race already?

The Premier League season is not even 25% played, but Liverpool’s hopes of a second title under Jurgen Klopp already look remote. Sunday’s 3-2 defeat at Arsenal left them 14 points adrift of the Gunners with the fact they have a game in hand offering only a glimmer of hope a desperate situation can be rescued. They are 13 points behind favourites Manchester City and even 10 behind Tottenham Hotspur, who have largely failed to convince this season but still occupy third place.

There is still time for Liverpool to rescue their league campaign, and few would doubt this group of players was capable of putting together a winning run to put them back in the picture, but Klopp admitted the gravity of their plight when speaking on Sunday night: “We’re not in the race … we’re in a tough moment and we want to get through this together and that’s what we are working on.”

It already feels as though time is against them. — Olley

The Jorge Sampaoli sequel at Sevilla kicked off with a 1-1 draw against high-flying Athletic Club on Saturday at the Sanchez Pizjuan.

It was not the win the home crowd would have wanted but it did end a run of four straight home defeats for Sevilla, their worst run in their own stadium since 2002. That streak brought the end for Julen Lopetegui, who departed the club after three years in charge, and the return of Sampaoli, who previously managed Sevilla in the 2016-17 season.

The Argentine has quite the task on his hands this time. Sevilla were in a title race last season and always finished in the top four under Lopetegui, but this weekend’s draw saw them slip into the bottom three. Only Cadiz and winless Elche are propping them up.

However, Sampaoli will take the positives from an improved performance against Ernesto Valverde’s Athletic, who remain third in LaLiga, although they are now five points behind leaders Barcelona and Real Madrid. — Marsden

Finally, on Sunday, Lyon decided to sack their manager after 18 far-too-average months. Let’s not name him (he was that bad) and let’s focus instead on his successor, Laurent Blanc.

After years of waiting for the right job — and a 14-month spell in Qatar with Al-Rayyan — the former Paris Saint-Germain manager (2013-2016) is finally back in French football and we will see now if he will be able to save Lyon’s season. The club is ninth in the Ligue 1 table, 12 points behind PSG, they have lost four and drawn one in their last five games and are not in Europe either. It has been a miserable season for them despite the quality of the squad.

Blanc, 56, has a big task ahead of him. His first game next weekend, away at sixth place Rennes, will be tough. Finishing in the top three, which is where Lyon should be and aim to be, will be even harder. — Laurens

Modeste makes the most of it for Dortmund

While we’ll give an honorable mention to the brilliant Moussa Diaby for his thunderbolt in Xabi Alonso’s coaching debut for Bayer Leverkusen, the Bundesliga‘s real star this weekend in front of net was journeyman striker Anthony Modeste. Why? Because he brought Borussia Dortmund back from the brink of yet another Der Klassiker defeat at home to Bayern Munich, scoring in the 95th minute to earn BVB a precious point that ensures the title race will remain interesting for a while longer.

The goal itself wasn’t particularly aesthetic, but it was a just reward for a player who has struggled to know how to help this Dortmund side in transition and is still reeling from Sebastien Haller‘s cancer diagnosis. Yet on Saturday, with the fabled Yellow Wall cheering him (and his teammates on), he twice found a way to make an impact.

With Bayern cruising at 2-0 up following a Leon Goretzka rocket and Leroy Sane finish either side of half-time, Modeste’s movement and intelligence helped set up Youssoufa Moukoko for a thundering strike 16 minutes from full-time. After Bayern sub Kingsley Coman was dismissed for a second yellow card in the final minute of regular time, Modeste outmuscled Noussair Mazraoui at the back post to nod home Nico Schlotterbeck‘s lofted cross with virtually the last action of the game.

Not only did the result frustrate the heck out of Bayern legend Oliver Kahn in the stands, but it kept the Bavarians reined in as the pack of teams at the top continue to jostle for position. Sometimes, a draw can feel like a win and Saturday surely felt that way at Signal Iduna Park. — Tyler

DORTMUND EQUALIZE AT THE DEATH 😱😱😱 pic.twitter.com/nXPMdUxBAR

Of course, we could question Juventus‘ defending, and especially Leonardo Bonucci‘s (who was not on a yellow by the way) for allowing Brahim Diaz to run the whole half of the pitch before scoring. However, it was an exceptional goal from the Spaniard in AC Milan‘s exceptional 2-0 win over Juve on Saturday at a packed San Siro.

The pace, the balance, the acceleration and then the finish from the former Malaga prodigy was breathtaking. You won’t see a better goal this weekend and not many this season either. To score it straight after half-time to give his team a two-goal lead was huge as well.

We tend to forget that the former Manchester City attacking midfielder is only 23, and even if he needs to be more consistently decisive, goals like this will surely help. — Laurens

All class from Pulisic

Love this move and finish! 👏 pic.twitter.com/ZHbgggGtqQ

Foxes in a hole

This might be the weekend Leicester City fans realise they really are in a relegation battle. Coming off the back of their 4-0 win over Nottingham Forest, Brendan Rodgers will have looked at the trip to Bournemouth as a chance to show his team had turned a corner.

It started so well with Patson Daka‘s goal after 10 minutes, but Bournemouth’s comeback to win 2-1 means Leicester have now lost seven of their nine games this season. Confidence should have been high after the result against Forest and a game against a newly promoted side represented a perfect opportunity to pick up points, but instead Leicester are again rooted in the bottom three — Dawson

It’s fair to say that expectations were modest for Schalke 04 this season, having finished 16th last year in their return to the Bundesliga. And yet this campaign already feels like a lost cause, with Saturday’s 4-0 shellacking by Bayer Leverkusen further proof of their slumping demeanor. Xabi Alonso’s senior coaching debut, having arrived just three days ago, was an easy welcome to the German league as his side tore through a naive Schalke rearguard time and again.

After Diaby’s wonder strike from distance in the 38th minute came three easy goals that looked like training ground moves. Surgical passing and clever runs opened the Royal Blues like a can opener, with Diaby twice combining with Jeremie Frimpong for simple side-footed finishes, with Paulinho adding a fourth late on by capping another simple passing pattern.

Schalke haven’t won in the Bundesliga since Sept. 10, scoring three times and conceding eight in defeats to Dortmund, Augsburg and Leverkusen. They face an easier run of games until the visit of Bayern Munich in the final round before the World Cup, but it’ll take some time effort to truly course-correct. –Tyler

Barcelona invested heavily in their attacking artillery in the summer, but it was goalkeeper Marc-Andre ter Stegen who earned them three points against Celta Vigo on Sunday.

Ter Stegen made a string of late saves as Barca clung on to a 1-0 win at Camp Nou, which took them back to the top of the league going into next weekend’s Clasico against Real Madrid.

The pick of the bunch came from Iago Aspas, who had scored nine times in 11 games against Ter Stegen for Celta before Sunday’s encounter. Aspas received the ball unmarked in the 84th minute, eight yards out, but his shot was brilliantly turned behind by the German stopper’s leg for a corner.

There were also saves from Unai Nunez and Hugo Mallo as Celta really piled on the pressure in the final stages of the game. Barca were also thankful to some last-ditch blocks, including one brilliant one from Marcos Alonso, who was playing as a makeshift centre-back.

Ter Stegen has now kept seven clean sheets in eight league games this season, conceding just one goal in that time. He has saved 19 of the 20 shots he has faced and not conceded in over 600 LaLiga minutes. Next up in the league is that trip to Madrid, who have doubts about their goalkeeper Thibaut Courtois‘ fitness going into the fixture. — Marsden

Sources: Arsenal’s Gabriel Jesus out 3 months
You can’t go deep in a World Cup if you can’t score goals; the USA were doomed
Tite: Dancing like ‘language’ to young Brazil stars
The US accomplished a lot in Qatar, but left everyone wanting more
Alves: Loss a ‘warning signal’ for injury-hit Brazil