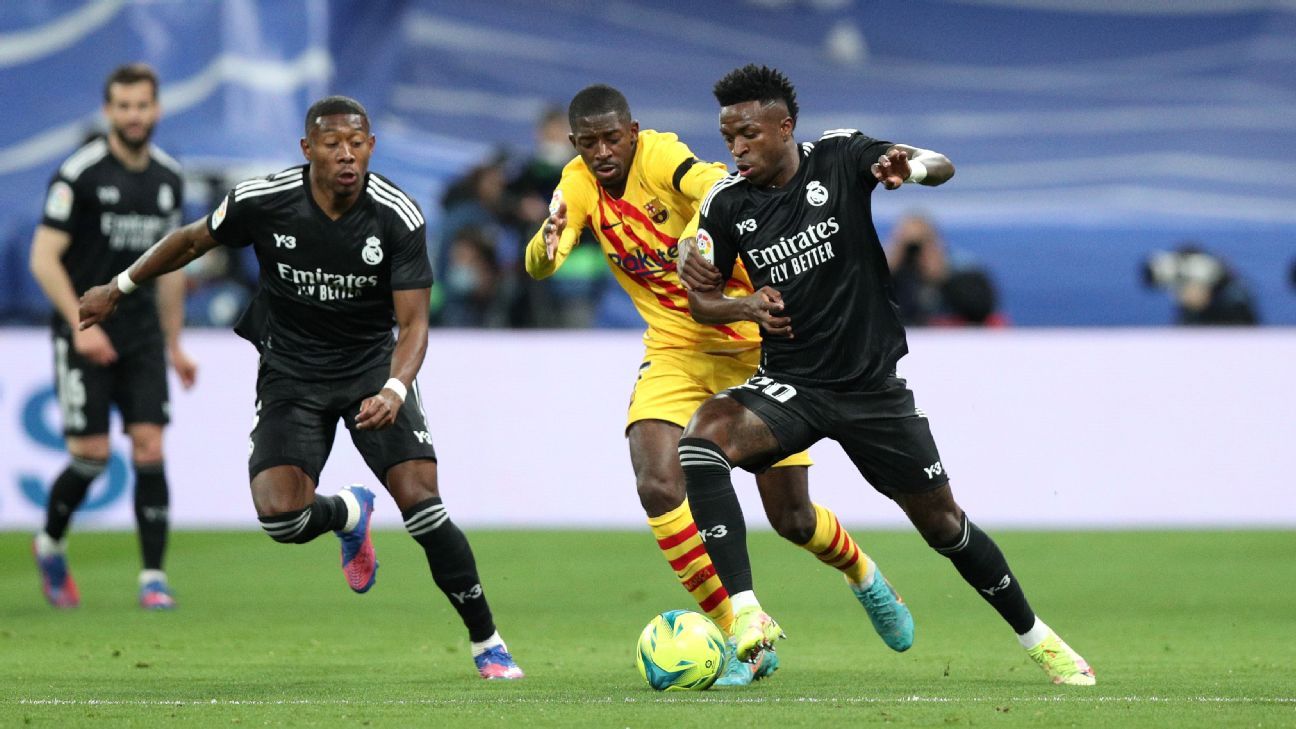 By the end of Barcelona‘s last triumphant visit to the Santiago Bernabeu in March, Ousmane Dembele must have felt like he was walking on air; the world at his feet. Vinicius Jr., in comparison, could have been forgiven for moaning that he’d just suffered a sucker-punch, that life had just knocked him off course in pretty brutal fashion.

Given that the two wingers are likely to be key for their respective teams as El Clasico reaches Real Madrid’s majestic stadium again this weekend, it’s worth looking at their reactions to that remarkable 4-0 Barcelona win, how they’ve played, developed and processed the impact of such a dramatic night in the world’s greatest football match.

Back in March, with Barcelona trying to stage an unlikely late title push and looking good to beat lowly Eintracht Frankfurt in the Europa League quarterfinals, Dembele was in scintillating form and a determining factor against Los Blancos. Two assists to break the game, thanks to crosses which Pierre-Emerick Aubameyang and Ronald Araujo headed home, and a good role in the third goal meant that Xavi’s repeated, brave but somewhat surprising, blind faith in the France international was repaid.

Vincius, clean through on Marc-Andre ter Stegen’s goal at one stage and generally one of Madrid’s livelier players, had built up to playing Barcelona — whom he’d ripped to shreds in a 2-1 win at Camp Nou six months earlier — with two goals and four assists in Madrid’s previous five LaLiga matches.

Now begin the stark comparisons from then until now — with Vinicius stellar, growing in authority and assurance; Dembele looking predictable, sloppy and gifting the ball away so much that he’s verging on being a liability. The World Cup-winning Frenchman followed up with just two assists and two goals in Barcelona’s remaining 11 matches — losing to Frankfurt and watching the 12-point gap between Xavi’s team and Los Blancos that night in March stretch to 13 by the time the season finished. Deeply underwhelming.

Vinicius? The then-21-year-old (there’s four years between these two mercurial, entertaining but very different wingers) showed that he’s made of the “right stuff.” As Madrid surged to only their second LaLiga and Champions League double in 64 years, the kid from Sao Goncalo near Rio de Janeiro, scored or created another 11 goals after the Clasico debacle — including the winner against Liverpool in the Champions League final.

This season Dembele fluttered back into form with two assists and two goals, until a month ago. He went on international duty with France, played 12 minutes, picked up a minor muscle overload and, in the meantime, his wife gave birth to their first child. Since then his form has evaporated. What’s more, across the entire season so far he’s only set up one goal for striker Robert Lewandowski. What should have been a fertile, potentially trophy-winning, partnership is, currently, arid.

Back to Madrid’s man of the moment. In a situation where midfielder Casemiro has left, striker Karim Benzema has only played twice in five weeks, the team can’t stop conceding domestically, and goalkeeper Thibaut Courtois, out of the blue, has been sidelined because of back pain, lots of responsibility has fallen on this fantastic emerging superstar.

In answer to the call, Vinicius has scored or assisted in all but two of Madrid’s 12 matches this season. There’s evidence, if you want to tot up the aforementioned facts and stats, to suggest that Dembele isn’t in the right form to make an impact on either Madrid full-back Dani Carvajal or Ferland Mendy — nor to wrench the Clasico in Barcelona’s direction.

Evidence, too, that Vinicius, without the presence of the injured Araujo, with whom Xavi has man-marked the Brazilian for the last 180 minutes of Clasico football during which Madrid haven’t scored, might arguably now let rip and produce a Barcelona-beating, man-of-the-match performance. But that’s not necessarily my key point.

It’s important, in comparing the two, to see how representative each player is of the current state of their respective clubs. Particularly Dembele. Xavi was without question a player whose vision, talent, determination, daring and technical skills soared when allied to a clever, organised, intelligent system. Yet his team, right now, are playing football which looks devoid of system. It’s a collection of good players, some of them excellent, where the ball is shuttled forward in the hope that one of the special players will do something special.

Barcelona, for weeks, haven’t been successful in producing high-quality possession football and certainly aren’t playing the kind of positional football which Pep Guardiola introduced at Camp Nou and which Xavi, for most of his nearly one year in charge, has been trying to teach the current pupils.

Dembele is key in this. From the moment he arrived, until now, there’s been no questioning his talent, pace, two-footed dribbling and shooting, or how he can either erupt from a standing start to a startling rate with the ball at his feet or, on the run, glide past defenders as if they’re not there. But ask him to be consistent? To do it game after game? To top all that off with a constant goal supply? To be ruthless? To shoulder responsibility for killer goals when the rest of the team are suffering? Even ask him to explain what’s in his head when he tries to trick, or cut inside, the third or fourth rival when one, or two at most, would have been the most-effective option? Well, join the queue.

Almost all of Dembele’s coaches, most fans, and most of the media have been left in puzzled frustration as to why he doesn’t develop or improve. The Frenchman recently told the Catalan media: “I’m left-handed but I play with both feet. These days I prefer to lead with my left and shoot with my right.

“Xavi likes his wingers to be very open, and to take on rivals one vs. one. Apart from Thomas Tuchel [at Dortmund], Xavi is the only other coach I’ve had such a close relationship with. They’re both totally upfront and honest with you. I’m never in any doubt about Xavi’s opinion of me. He tells me straight if he thinks I need to work on something and is totally clear in his feedback on my fitness and whether or not he’s including me in the starting lineup. He gives me a huge amount of support.

“He’s really tough on us in training and doesn’t hold back if he thinks it’s not good enough. He talks a lot about the importance of working hard not just on the pitch but off it too and has told me that, if I want to be the best, I need to score more goals, give assists, maintain a strong mental attitude and be totally focused. He saw from the start that he wanted me to do more for the team, to be a more complete player.”

Right now, whether it’s a physical dip, a loss of confidence or just a tired young man suffering from the impact of having a first newborn child in the house and sleep being a vanishing commodity, Dembele has regressed. Badly. And, like Xavi’s team, he doesn’t have exceptional, rigorous habits to fall back upon.

If Dembele is off form, there’s nothing for it but to wait until he clicks again. It’s not healthy for Barca. The team around him, once steely, entertaining and formidable because they stuck to certain demanding and important playing principles over and over again, until opposition couldn’t keep up, now produces ragged, make-it-up-as-we-go-along football if their superstar players are out of form.

Vinicius is a vastly different case study. On arrival, and for his first months, he was wild, fun, blessed with some exceptional and rare abilities — but neither well-ordered mentally nor comfortable within the range of team duties needed from a left-sided striker in a 4-3-3 team full of world-class, hard-nosed winners.

The contrast with Dembele being that Vinicius learned. The Brazilian listened, he assimilated, he worked harder, he applied the lessons from training, from Luka Modric, from Benzema, from Casemiro. Vinicius’ game hasn’t lost any of the intuitive, high-speed, split second technical beauty, but he’s harnessed all that to make those around him better and to ensue that the team wins.

It’s been wonderful to watch and, frankly, Xavi could do a lot worse than give DVDs of Vinicius to poor old Dembele. An away Clasico would be a perfect time for the Frenchman to wake up again and dazzle the watching world. But, at this distance, it looks like Vinicius might be richly rewarded for the way in which he’s been able to blend talent, magnificent athletic speed, learning and personal development towards the greater good of Real Madrid. Sunday could well be Vinicius’ day.