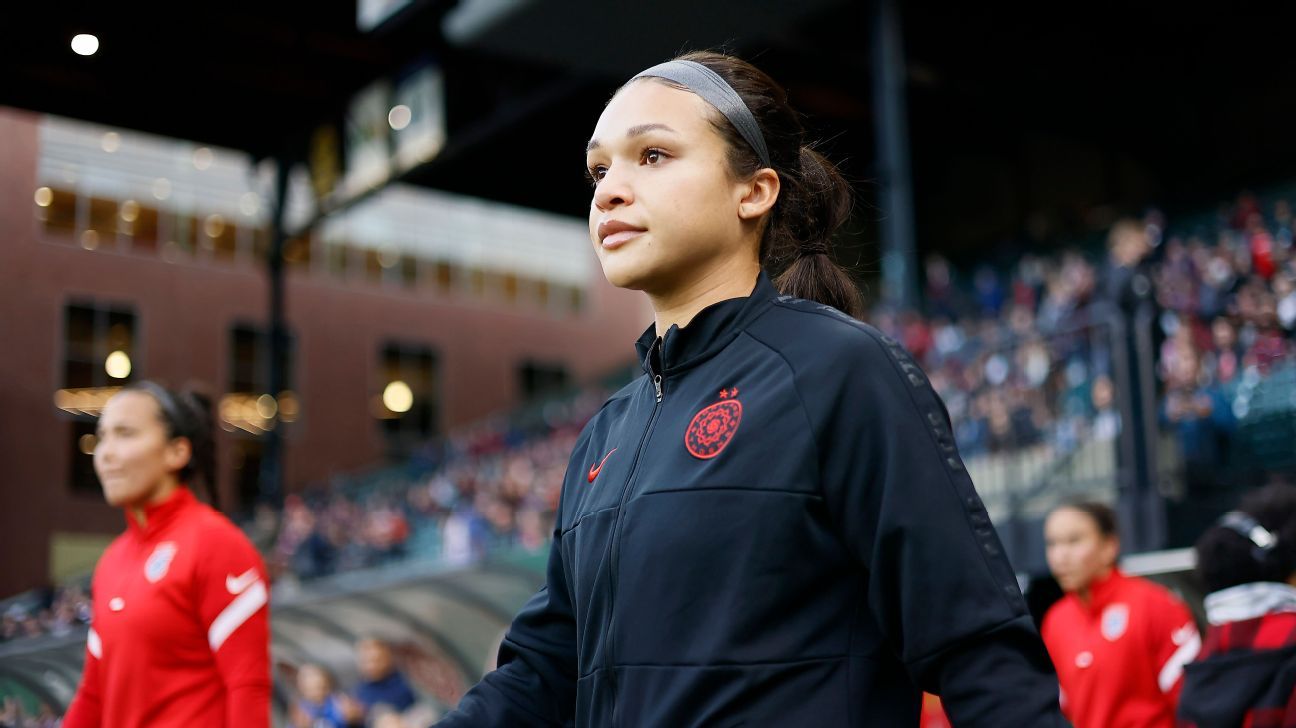 U.S. women’s national team and Portland Thorns forward Sophia Smith said she hopes that her club’s fans continue to support the team despite the continued fallout from last Monday’s Yates report into abuse in the NWSL.

The Thorns are scheduled to host a home playoff game on Oct. 23 against the winner of the first-round game between the San Diego Wave and the Chicago Red Stars. That has led to questions about what actions fans might take in reaction to details that came to light in the Yates report about the Portland organization’s handling of abuse allegations against former manager Paul Riley.

Speaking to reporters on a video call ahead of Tuesday’s USWNT match against Spain, Smith said: “I think what everyone is trying to do is support the players. I think that’s the most important thing that anyone can do right now. I think in terms of our home game coming up, obviously it would be really disappointing to play in front of an empty, silent stadium. I think ultimately fans not showing up affects the players more than it affects anyone.

“So I think talking to some of my teammates, we would still really like people to show up and support us. Because at the end of the day, even through all of this, we still have to step on the field and perform and play soccer. So I think our biggest thing would be is we want to do that in front of our fans because that’s one of the positive things that we have left in Portland and something that we always look forward to.”

The Yates report, which was commissioned by U.S. Soccer, detailed how after Riley was fired for cause due to allegations of sexual harassment and coercion against then-Thorns players Mana Shim and Sinead Farrelly, he received a glowing job recommendation from Gavin Wilkinson, then the club’s president of soccer. Owner Merritt Paulson added at the time that he “had a lot of affection for Riley,” who was ultimately hired by the Western New York Flash, which became the North Carolina Courage after relocating.

Smith added that there have been “lots of conversations” between the Thorns contingent of the USWNT and their club teammates back in Portland, and she feels that there have been some positive developments within the club. Wilkinson and the organization’s president of business, Mike Golub, were fired last week. It remains to be seen if Paulson, who stepped aside from any active duties with the NWSL side, will continue to own both the Thorns and the Portland Timbers in MLS.

USWNT and Portland Thorns’ Becky Sauerbrunn speaks out after findings of systemic abuse across women’s soccer in the Yates report.

“There’s been a lot of a lot of good discussions happening,” Smith said. “They’ve been listening to the players. We’ve expressed how we felt and haven’t been afraid to kind of speak up. And I’m happy with the direction that things are going. Obviously, I can’t share specific details as a lot of it is confidential within the club right now, but there’s been a lot of discussions happening and, and yeah, change is being made.”

The Rose City Riveters — the main supporters group of the Thorns known for creating the festive atmosphere at home games — issued their own statement on Monday acknowledging that some fans will choose not to come to the next Thorns game amid “tough personal decisions.”

“Some folks simply are not comfortable in the stadium right now. Some do not feel that they can give their money to the owner,” the statement said. “And some will purchase tickets and be there, ready to cheer with all their hearts. These are all decisions that we understand and support. But we want you to know: whether we are in the stadium or outside of it, in the street or at home, we support the players of the Portland Thorns.”

The Spain team, who will host the USWNT on Tuesday, is going through its own struggle in terms of receiving proper treatment from its manager, Jorge Vilda, as well as the RFEF, Spain’s football federation. Fifteen players resigned from the team last month after demanding that Vilda would no longer be coach. But the RFEF backed Vilda, stating it would “not allow the players to question the continuity of the national team coach” and that the players would only be allowed to return in future if they apologized.

Smith added that she and her teammates are in full support of Spain’s players.

“Obviously, it’s sickening. It’s hard to hear,” she said of what the Spain players were going through. “Is it surprising? I don’t know. I mean, it’s obviously happening everywhere, and that’s what’s horrible. It’s hard to even put into words. So I think as a team, we’ve had discussions about what we can do because I think, like I said earlier, that the most important thing is supporting the players and whatever we can do to support them, we will do.”

Later on Monday, Smith’s U.S. teammate and Red Stars goalkeeper Alyssa Naeher tweeted a message on behalf of the team’s players, saying they were “saddened, infuriated and appalled by the reprehensible findings of the Sally Yates report.”

The Red Stars’ handling of allegations of verbal and emotional abuse by then-coach Rory Dames was also a key part of the Yates report, which found that owner Arnim Whisler dismissed concerns from players about the abusive behavior of Dames, who resigned Nov. 21, 2021.

The statement added: “This team has endured serious hardships over the years and it is finally our time to implement the changes for which we have tirelessly pushed.

Like Smith, Red Stars players also expressed gratitude for the club’s fans, saying: “Your loyalty has kept us going even in the darkest of times.”