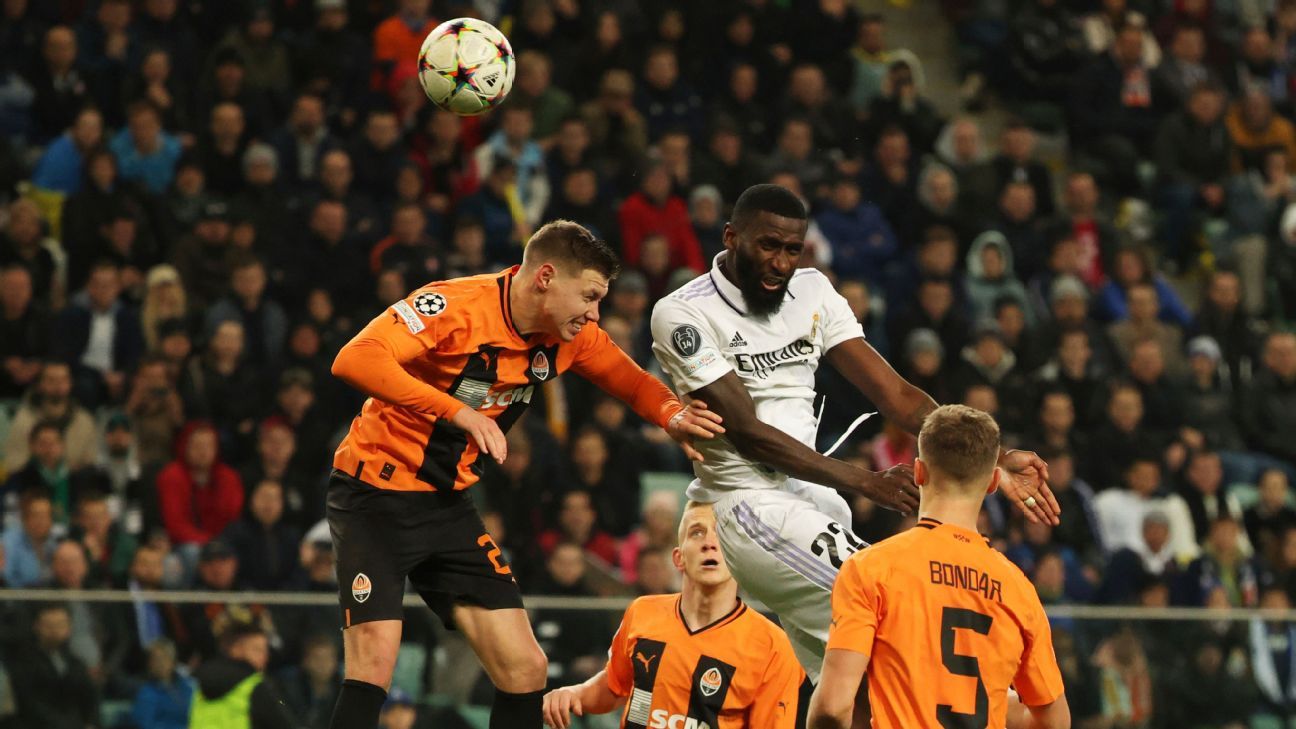 A last-gasp header by Real Madrid defender Antonio Rudiger rescued a 1-1 draw against Shakhtar Donetsk after the Ukrainian side had taken the lead in the Champions League on Tuesday.

The draw meant Madrid advanced to the knockout stage ahead of their next group game at RB Leipzig on Oct. 25.

Shakhtar went ahead one minute into the second half in Warsaw when Bogdan Mykhaylychenko found Oleksandr Zubkov unmarked in Real’s box and the midfielder nodded home into the bottom right corner.

However, Rudiger levelled five minutes into stoppage time by taking advantage of a neat pass from midfielder Toni Kroos to deny Shakhtar a famous victory.

The draw did at least stop Real from immediately advancing to the knockout stage, although Carlo Ancelotti’s men can secure their spot in their next group game at RB Leipzig on Oct. 25.

Real, who lacked sharpness and their usual killer instinct, had a chance to take an early lead through Karim Benzema in the 18th minute but the Frenchman, who struck from close range, was denied by goalkeeper Anatoliy Trubin.

“We played badly, sometimes it happens in football,” Ancelotti said. “We had the game under control in the first half. We tried to play inside, not outside. It was more complicated after we conceded, we lost a bit of balance.

“We conceded and suffered on the counter. Sometimes that happens. Explaining it is difficult. There are games you have under control and then you concede a goal and the morale of the opponent grows. The positive is we didn’t give up as always, beating Real Madrid isn’t easy. We’re into the round of 16 and only those who go through can win the Champions League.”

Trubin, extremely busy between the posts in Warsaw, pulled off another great save to deny a low shot by Benzema in the 36th minute, and denied Rodrygo a minute later by stopping his shot from going inside the left post.

The Shakhtar goalkeeper was alert just before half-time to parry a dangerous long shot by Real midfielder Federico Valverde over the bar.

Trubin’s heroics were rewarded when Shakhtar went ahead one minute into the second half. Bogdan Mykhaylichenko found Oleksandr Zubkov unmarked in Real’s box and the midfielder nodded home into the bottom right corner.

The hosts were inches away from making it 2-0 in the 65th minute through striker Lassina Traore but his shot from inside the six-yard box bounced off the bar.

Three minutes later Zubkov, who was also on target in last week’s 2-1 defeat in Madrid, had another chance but Real’s Ukrainian goalkeeper Andriy Lunin managed to claw the ball away.

Substitute Vinicius Junior blasted over the bar three minutes from the end of regulation time.

Madrid, who are the only team to have never been knocked out in the group phase, hold a four-point lead in Group F over second-placed Leipzig, who won 2-0 at Celtic.

Shakhtar slipped one place down to third, on five points.

Ancelotti’s side plays Barcelona in the Clasico on Sunday, but he downplayed any suggestions that Madrid had an advantage due to an extra day’s rest.

“No I don’t think so, when you play on Wednesday and on Sunday you have time to recover well,” Ancelotti said. “I made changes only to avoid problems. We had to prepare well for today, we played on Saturday night and travelled. A few players could have been tired, I didn’t want to take risks, that’s why some didn’t play. It wasn’t to have them fresh for Sunday.”

Off the bench, Ronaldo can help Portugal in a way he refused to at Manchester United
Sources: Arsenal’s Gabriel Jesus out 3 months
Saka on Mbappe comparison: ‘There’s only one’
Australia won’t fear Messi: He’s ‘just a human’
Belgium coach Martinez to leave after WC exit