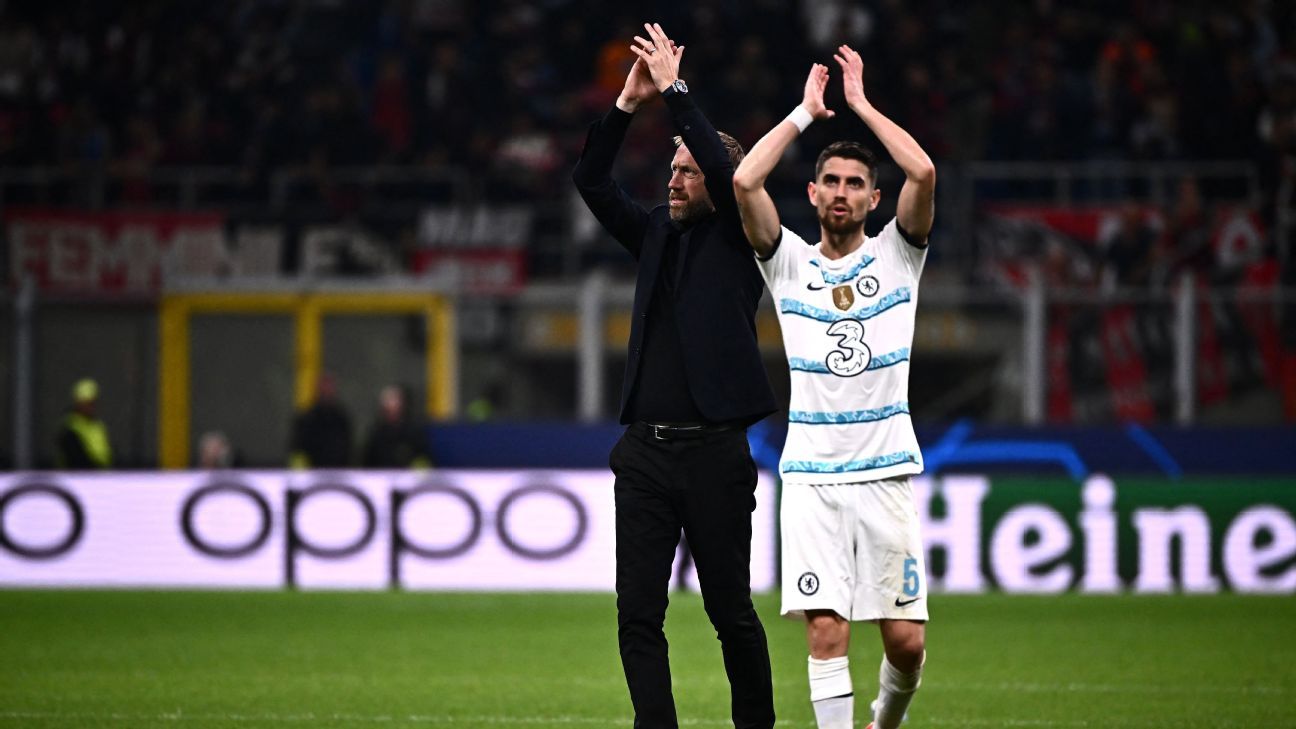 Chelsea took advantage of an early red card against Fikayo Tomori to beat AC Milan 2-0 at the San Siro and move top of Champions League Group E on Tuesday.

The Blues’ win continues a strong start under manager Graham Potter, who remains undefeated in three Champions League matches since taking over for Thomas Tuchel.

Milan were severely hindered by a man disadvantage after Tomori was sent off early for fouling Mason Mount in the penalty area in the 18th minute, which Chelsea capitalised on with Jorginho converting from the spot. Soon after, Pierre-Emerick Aubameyang continued his good form by doubling Chelsea’s lead to earn his side’s fourth consecutive victory and continue their unbeaten start under Potter’s stewardship.

Chelsea did suffer a blow in the second half as Reece James was forced off injured just after the hour mark.

With seven points after four matches, Chelsea sit on top of the group followed by FC Salzburg with six. AC Milan and Dinamo Zagreb each have four points.

1. Chelsea’s Potter makes light of step up to Champions League

Graham Potter admitted at his unveiling as Chelsea boss that he had never even been to a Champions League match. A month later, the 47-year-old has taken seven points from his first three matches in the competition, recovering from a slow start under his predecessor Thomas Tuchel to put the Blues’ Group E fate in their own hands.

Back-to-back wins over a resurgent — if under-strength — AC Milan is a notable achievement for Potter, particularly winning here in the cauldron of the San Siro. Fikayo Tomori’s early red card made this a much easier test than it could have been, but Chelsea showed composure and maturity to forge into a 2-0 lead and then stand their ground when Milan’s supporters wanted referee Daniel Siebert to even up the sides with every foul Chelsea committed (10 players ended up being carded).

Chelsea still have a tricky trip to FC Salzburg, but they know victory over Dinamo Zagreb next time out will ensure they reach the last 16.

Tomori has made quite a name for himself at San Siro since leaving Chelsea, initially on loan in January 2021 before a permanent £24 million move last summer. He admitted before last week’s reverse fixture there was a “point to prove” against his former employers.

Yet after a chastening return to west London last week, his involvement lasted just 18 minutes on Tuesday, sent off by German referee Daniel Siebert for pulling back Mason Mount in the box. It looked a harsh call on first viewing but Tomori got the wrong side of Mount and then gave the referee a decision to make by grappling with his former teammate as he bore down on goal.

Once Siebert decided it was a foul, the red card was a logical step. Tomori argued his case furiously as the vociferous home fans vented their anger but the 24-year-old had to leave the field. And this incident now joins last week’s 3-0 defeat on top of an own goal scored at Chelsea while on loan at Derby in November 2018.

Such a high-profile mistake is also an untimely blow for Tomori’s hopes of forcing his way into Gareth Southgate’s England squad for the World Cup.

The only downside for Potter here was a deepening injury situation which isn’t severe enough yet to be branded a crisis but is nevertheless a situation of mounting concern. James, who has impressed in these two matches against Milan, trudged off on Tuesday with a problem just after the hour mark.

Wesley Fofana is already ruled out for several weeks with a knee injury while N’Golo Kante suffered a setback in his recovery from a hamstring problem and Hakim Ziyech is unwell.

The games come thick and fast until the World Cup with nine more games until the tournament starts. Potter is already rotating heavily — he made six more changes here — and everyone will be needed in the coming weeks.

Theo Hernandez is a hugely influential player for Milan but on the same flank, James outshone him and regularly caused Milan problems in transition as Chelsea wrestled control of the game.

Will consider himself unfortunate to be dismissed but he was caught the wrong side of Mount and gave his team a hugely difficult task for 72 minutes with ten men.

Fikayo Tomori was sent off for this challenge on Mason Mount, was it a red card? 👀 pic.twitter.com/oiBXtbrkPB

This was the foul that sent Tomori off and awarded Chelsea a penalty. pic.twitter.com/YDgAa92XwT

After the match: What the managers, players said

AC Milan coach Stefano Pioli on Tomori’s red card: “I just asked the referee whether VAR was working properly. I don’t believe it was the referee’s best evening tonight, that is without a doubt.”

Chelsea coach Graham Potter on Tomori’s red card: “It’s hard from where I’m sitting. It looks like he had his hand on him and Mason Mount was through on goal. I need to look again clearly. It’s nice for the penalty and nice for Jorginho to score.”

– Jorginho’s last 19 goals have all come from the penalty spot. His goal on Tuesday was his seventh career penalty goal in Champions League (6 with Chelsea), which puts him at eighth all-time. Since he joined Chelsea in 2018-19, the only players with more goals from the spot in Champions League are Robert Lewandowski (9) and Lionel Messi (7).

Chelsea: A slew of upcoming Premier League matches — at Aston Villa on Sunday then at Brentford on Wednesday, before hosting Manchester United on Oct. 22. The Blues’ next Champions League game will be at FC Salzburg on Oct. 25.

AC Milan: At Hellas Verona in Serie A action on Saturday and then hosting Monza on Oct. 22. Then a trip to Dinamo Zagreb for the Champions League on Oct. 25.